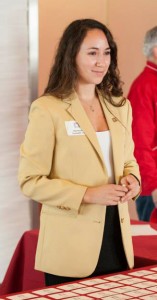 About Me
As an undergraduate student, I was active in the Greek Community as a sister of Alpha Gamma Delta. I also served two years as a Recruitment Counselor to get other women on campus interested in Greek Life, and one year on the Greek Judicial Board. I was a founding member of weR: The Spirit of Rensselaer Society, and began the fundraising campaign weR GOLD that allows alumni to donate easily and directly to the clubs that matter most to them.

Now a graduate student, I have recently become the Phalanx Honor Society President. One of Phalanx’s major goals this year is to increase our visibility on campus through increased social media and campus participation. I have also recently become active in the Troy community as the Social Media Coordinator for the Junior League of Troy. The Junior League of Troy focuses on supporting women and children in the local community by promoting literacy and healthy living.