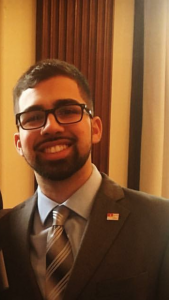 During my career as a student, it was always a focus of mine to get involved in the Rensselaer community. During my freshmen year, I pledged and became a brother of the Pi Kappa Alpha Fraternity, where I later had the privilege of serving as the External Vice President of the Gamma Tau Chapter. Through my first year at RPI, I also became a student ambassador for the Red & White Student Organization and was selected to be the freshmen representative for the Society Hispanic Professional Engineers. As a junior, I was selected to be part of the Professional Leadership Program, a leadership programs for juniors and seniors based on weekly professional workshops. Since 2014, I have been part of the Office of Student Living & Learning Team as both a Resident Director and a Resident Assistant for First-Year Residence Halls. Finally, I have worked as an office assistant for the Office of Student Success thought-out my five years at RPI, where I also served as a Student Orientation Advisor during the 2013 Summer.

I am also a member of Pi Tau Sigma and Sigma Gamma Tau, the Mechanical Engineering and Aeronautical Engineering Honor Societies, Order of Omega, the Greek Honor Society, and the National Residence Hall Honorarium, a leadership-based honorary comprised of exemplary residential students who value recognition and service.

After the completion of two internships in the Pacific Northwest, I have accepted a full-time position with the Boeing company, where I will serve as a structural analyst.